Now we all know that "samurai" was a social class, but for the purposes of this class write-up, the samurai character class stands above the other members of the nobility. Like the paladin, he is an ideal that few can attain. He is the samurai of legend and fiction, rather than history. 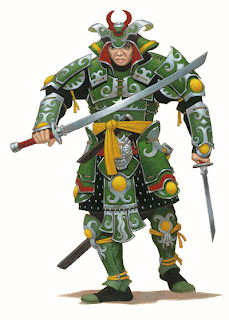 Samurai are elite warriors, well trained in many areas of warfare. In most cases, they serve a powerful lord, but some become ronin (“wave men”), free from feudal obligation, but without recourse to the wealth and influence of a patron. However, it is often these wandering samurai who make the greatest mark on the page of history. Not every member of the warrior class has the Samurai character class – these men and women are truly paragons of the warrior code.

Samurai can wear any kind of armor but cannot use shields. They are able to use any weapon, but are expected to carry a bastard sword (katana), both as a symbol of their status, and as a means of defence. Samurai use the Paladin Experience Table, and the Fighter, Paladin and Ranger Saving Throw Table. They attack using the Fighter values. Samurai must be Lawful in alignment.

Bushido, the way of the warrior, is a code that many of the warrior class try to follow, but the Samurai is its exemplar. This way can be summarized in seven essential principles:


Kiai – by focusing the internal energies of the body (ki) into a fierce shout, the Samurai can increase his or her Strength to 18 (if it is already 18, then it increases to 19) for 1 round. A Samurai can focus his or her ki a number of times per day equal to his or her level.

Reaching 2nd Level – the Samurai gains +1 bonus to damage dice, this increases by +1 every 3 levels after 2nd

Reaching 3rd Level – Samurai can only be surprised on a roll of 1.

Reaching 5th Level – The Samurai gains immunity to all types of fear.

Reaching 6th Level – The Samurai can choose to cause fear in all creatures with 1 HD or less (saving throw vs breath weapon). The Samurai can control whether this power is in effect at will. Any creatures who fail their save are struck with fear, either surrendering or fleeing from the Samurai. Any creature that passes the saving throw is immune to the fear effect for that encounter.

Reaching 7th Level – The Samurai is offered jito (stewardship) over one of the properties of his lord; the Samurai is under no obligation to accept. Should the Samurai refuse, then he or she is offered a fitting home in the city or camp where the lord makes his headquarters. If he or she accepts, then a shugo (constable of the province) watches over and directs the Samurai. As jito, the Samurai must watch over the area, settling disputes, protecting the property, collecting taxes and quelling rebellion. In return, the Samurai receives one quarter of the taxes collected.

The lord provides the new jitowith 10 fighters and 1d4 samurai (all of 1st to 3rd level). The loyalty of these men ultimately lies with their lord, but will serve the Samurai unless the lord intervenes. The Samurai will always retain his or her position as jito even as he or she increases in level. The duties can be assigned to an underling (in exchange for a portion of tax), and the Samurai is not required to remain on the property.

The Samurai does not own the property, but the only way it can lost is if the property is horribly mismanaged or the taxes are not turned over to the Samurai's lord. It is the lord's responsibility to seize control back from the Samurai in the event of revolt on the latter's behalf.

Reaching 8th Level – The lord offers the Samurai the position of shugo: if the Samurai accepts, he or she becomes responsible for the protection of a province and of protecting the lord's interests in that province. It is expected that the Samurai will administer justice and supervise the jito under him or her. The Samurai attracts 10d10 1st Level Fighters as followers, but there is a 20% chance that one of these is actually a spy sent to infiltrate the new shugo's household (the spy may be of another class such as a Thief or Ninja). No more than 1 spy will operate in the household. The fighters will be loyal to the Samurai as long as their needs are met (food, housing, adequate pay), and as long as the Samurai's fortune does not take a turn for the worse.

Reaching 9th Level – The Samurai attracts 2d10 1st Level samurai, all of whom are absolutely loyal to the PC. In addition, 1d6+1 specialists will request to be taken into the Samurai's service. There is a 10% chance that one of these is a spy (typically a Thief or Ninja) sent as a precaution.

Reaching 10th Level – The Samurai gains the power of the great kiai, or paralysing shout. The character's ki is summoned up in the form of a ferocious war-cry: all enemies within 10 feet must save vs paralyzation or be stunned for 1 round. (see p144 AEC). The Samurai's Strength is also increased to 18 for 2 rounds (if the Samurai already possesses a Strength of 18, then it increases to 19). The great kiai can only be used once per day, and the Samurai cannot use his normal kiai and the great kiai on the same day.

(Phew! That was a bit of work! On the menu still - ninja, sohei, shukenja and sohei spell lists, conversions of spells, monsters is... a whole bundle of trouble. I am not going to convert yakuza - thieves can cover that. I'm also not converting barbarians at the moment, until I can think of what to do with them.)
Posted by Unknown at 00:26