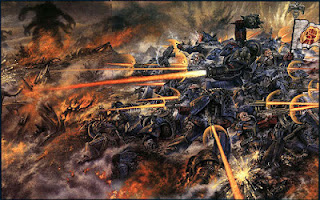 It's the time of year when a young man's thoughts turn to a far future in which there is only war. For a while now, I've been contemplating collecting an army for Warhammer. I know, I know... that way lies madness, but it's been something I've wanted to do for years, ever since reading the mighty tome that is the Warhammer Fantasy Battle 3rd Edition rulebook. I already have the basis for a wood elf army with a unit painted up and several characters in various stages of prep, but I'm also drawn to high elves and the knights of Bretonnia. But why the far future? Well, the local games club seems to be all fired up with the release of 40K 6th Ed. Photos of wonderfully painted armies clashing across the coffee shop's tables have been very inspiring. The largest force I've ever collected for 40K was 2 Necromunda gangs, so I'd have a steep learning curve in regards to painting in bulk. Mind you the first and last time I painted a unit of anything was in preparation for Salute, where I took 4 days to paint 20 Wood Elves. A way to go, methinks.

Am I insane? I really want to get back into playing some sort of rpg or wargame regularly, and 40K is the only game in town really. Although, I have garnered a lot of interest in the Dungeons and Dragons board game (the one released by Parker Bros) and Kill Doctor Lucky, so who knows? Maybe I can try out Song of Blades and Heroes or somesuch with the club.
Posted by Unknown at 16:02 4 comments:

Please go to the Secret DM's blog and enter this amazing contest! http://www.thesecretdm.com/2012/07/contest-time-super-secret-happy.html

Submit your old school feel room descriptions and get the chance to have them professionally produced by a stellar line-up.