We continued with the raid on the drow hideout from where we left off last week, with my character Tarren, and his half-sister Chary leading the way. It all seemed in the bag, with most of us having a lot of special powers still to use and action points to burn. It didn't turn out that way.

I nearly saw the campaign I have been DMing for 3 years ended by a guest DM and a PC turned into a mind-flayer's thrall making mincemeat of the party. Once the dust had settled, Chary lay dead, the paladin and the wizard were unconscious and Tarren wept bitter tears at the loss of his sister. Out of character I hoped that the party had 5000 gold to resurrect her.

"I'm not sure I want to be resurrected after the lack of effort made to rescue me" her player harrumphed. She has a point in my case as i chickened out from running across the room to help her.

It was, however, a very tense, exciting encounter and I even considered running away at one point. It had an added frisson for me as, if it had ended in a TPK (Total Party Kill) then it would have wiped the character slate clean for the campaign. 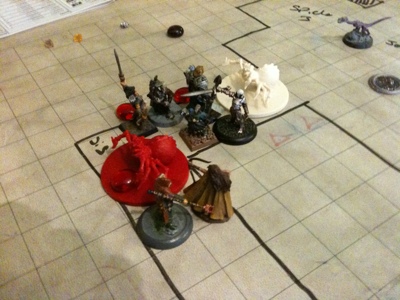