The Conjunction of the Million Spheres 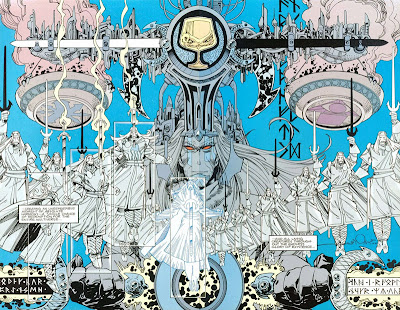 A while ago (ok, 6 months ago), I crowdsourced some alternate worlds for world-hopping characters to visit, somewhat in a Moorcockian vein. Several luminaries contributed and here are the results in no particular order and with no attempt to put them into a random table or any suchlike thing.
WHERE HAVE YOU BROUGHT ME TO THIS TIME, OLD GIRL?
Waterloo just before it goes completely pear-shaped for Messr. Bonaparte.


The Rainbow Realm of the Sky Lords


The Adamantine Pyramid of the Last Pharaoh of Universe X


The Treasury of the Gnome King


Mars back when it was green and filled with dinosaurs

The two-dimensional realm of shadow beasts.


The remnants of a caste culture in underground tunnels that are recognized by the color of their clothes.


The inside of a Genie's bottle. 95% of the Genie being around and pissed.


The river Styx. Someone pushes two golden coins into your hand and demands to be taken over.
The Glittering Disco Sphere of the Ten Thousand Funk Angels


The Green Dragon in Bywater, just after last orders, but before chucking out time.


Planet Nauga, were the hyde comes from.


A house party in Romford hosted by some crazy woman called Abigail. You'd better have some canapes...


A two dimensional place whose inhabitants are made of flock wallpaper.

An alternate world with near identical duplicates of everyone where good is evil and all males have van Dykes.

Celtic myth but everything is based on cyber-tech and Kirby-esque armour. Balor's evil eye fires a laser beam, Nuada has an adamantium hand etc.

Teg-zaz aka "Planet BBQ". This entire planet is built of BBQ's randomly teleporting in from the multiverse. The few sentient beings there attempt to utilize every part of the BBQ when scavenging. Food left in the grill is a particular treat, and Brick BBQ's are considered the holy grill. Hibachis? not so much. New folks may be enslaved and sent to mine BBQ's for useful parts.

The Earth of the [British] Avengers, the prisoner, and Danger Man, transitioning into what will become a bifurcated UFO and Space:1999 -- Pre-Chilani expedition to Planet Ultra [1].

Into the passenger seat of Burt Reynold's camaro in Smokey and the Bandit.

The Fortress of Ultimate Darkness (with some dwarven thieves).

Loompaland, where the players get attacked by Whangdoodles, Hornswogglers and Snozzywangers. Killing or allying Oompa Loompas is purely the players' choice.

Crawling backwards through a window in Blackmoor's multidimensional Comeback Inn

Onto that ship getting sucked into the red whirlpool with the dragon circling around it. You know the illustration I'm talking about. I'm pretty sure it was a Jeff Easley. [Dragonlance]

The inner workings of Big Ben.

A branch halfway up Yggdrasil. Deer instead of squirrels.

The City of Brass

That room on the cover of the PHB, just as one of the thieves pops that gem out of the statue's eye. Hijinx ensue.

On the lowest level of the temple of elemental evil.

Onto the Flying City of Serraine, as gnomish biplanes buzz your interplanar vehicle.

You find yourself inside a glitterboy suit in the world of Rifts. Don't kill everything at once!

Berlin underground; with posters of upcoming 'Zowie' concert "Iggy Moonmudd & the Githyanki's out of Aether!"

In the Frazetta Death Dealer painting.

In an M. John Harrison landscape with multicolored toxic pools, a poisoned dwarf, and a lacquered horse skull with pomegranates for eyes.

Alternate Earth, Vietnam, Massacre at Ruế; "Sons of Set" face off against the "Lions of Mitra”
You are with the Filipino army at the Battle of Reykjavik.

The five who would be one, dance the night away at Studio 51 ;"Elric, Corum, Hawkmoon, Erekosë & J Cornelius" combine into a five-faced Shiva too save all the many spheres of reality from 'Yrag Xagyg'
Don't you mean 'Agag Ydal', daemon servitor of Xiombarg?

Breakfast in the Ruins?

The PCs must rescue Audrey Hepburn from post-apoc New York?

that is sounding more like save Audrey Hepburn from the Hill Cantons.

An idyllic Greek island with the catch that it's inhabited by Bacchic devotees singing ABBA music.

The genie cities of D&D (if you can think of something to do there):
The Great Dismal Delve
The City of Brass
The Palace(?) of Glass & Steel
The Coral & Seaweed Cave (I can't remember. Marids - yawn.)


The Night World - the Last City of Man is under siege from the Tarrasque and Cthulhu. You get there through an abandoned House on the Borderlands that travels through time. Pig-orc-ghouls ambush you.

You find yourself on a broom in a game of Quidditch with Stuka dive bombers attacking you! Your only hope is to get to a covered bluff on the ridge of the Dragon Pass... PS : The other team are all anthropomorphic DUCKS.

A massive sprawling city, the bigger the better. Everyone in the city was frozen in time. Just the PC's, and the few hundred or so other non-frozen people who have been around for a couple generations. Maybe some of the "others" are monsters that use the frozen people as food stuffs.

Emerging from the wine cellar of Baron Munchausen

The Eternal City of Tanelorn - City of the Balance, where heroes find peace, free from strife. Until your PCs turn up, and then there’s a bloody great invasion force of Chaos, or dinosaur-men.


The Pit - a city built around a black hole of intersecting realities that pulls people and things from those dying timelines. Ruled by the Lords of the Pit, once-human technologist-sorcerers.

For showing the players what the denizens of the Caves of Chaos look like. 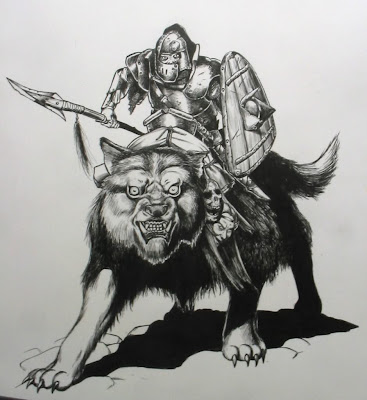 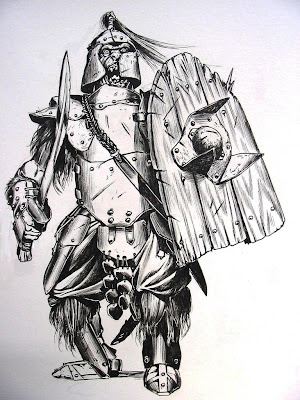 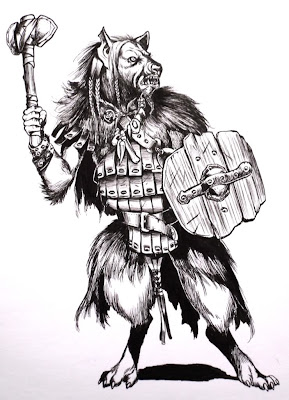 Sometimes Jim Holloway hits it out of the park. I'm not a fan of his depiction of adventurers as hapless Three Stooges doofuses (much as I know this to be something that many OSR bloggers love as a characterisation of same), but he is great at showing humanoids as brutish and, above all, practical. Their armour and weapons are cobbled together but do the job. Nice work, Jim.
Posted by Unknown at 22:59 1 comment:

Lazy Post of Artistic Stuff that is D&D for me 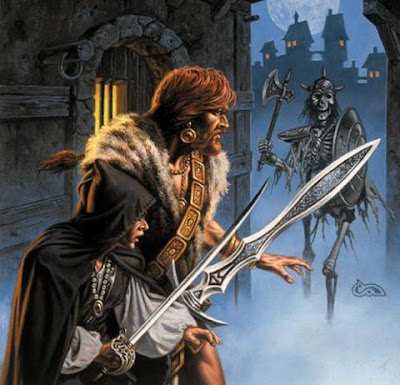 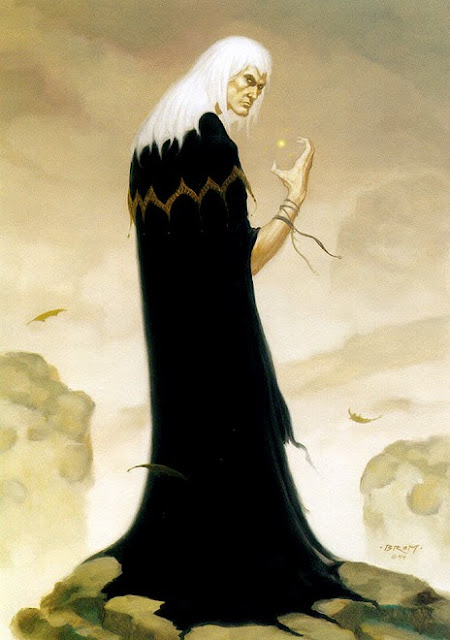 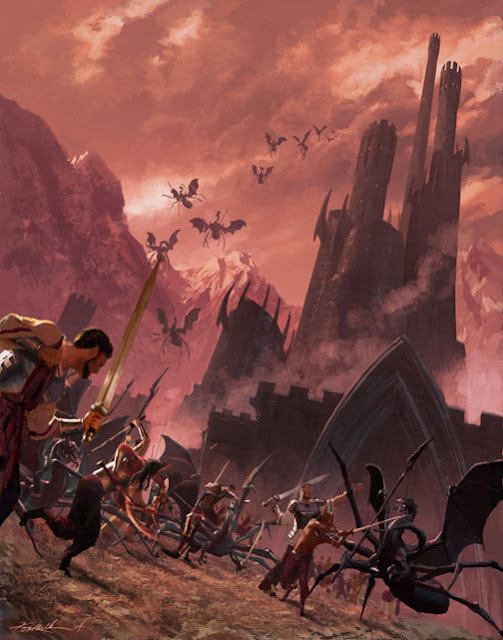 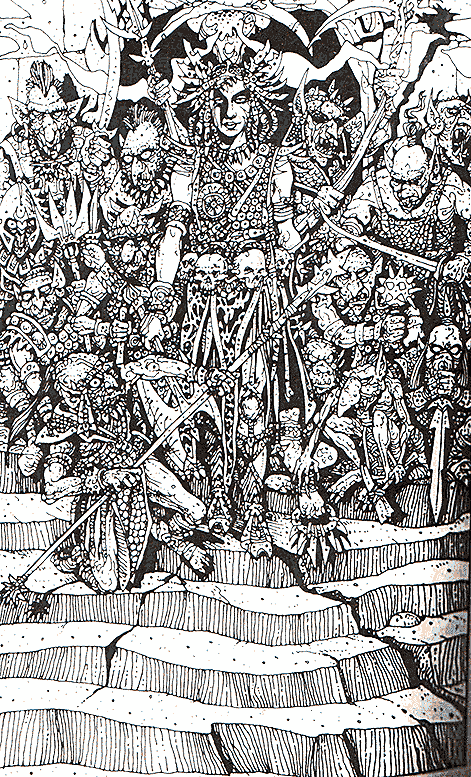