The Nine Men of Muriz 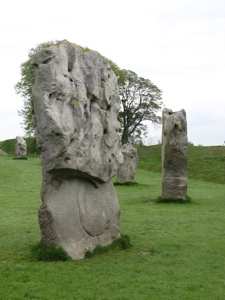 There are places where the Church does not hold sway, places where the missionaries never got the faith of Cooshboth to take root, or where the ancient powers have reclaimed the hearts of men. Such a place is the ring of standing stones known as the Nine Men of Muriz.

Who or what 'Muriz' is or was is unknown, despite various enquiries and folk etymologies. Suffice it to say it is a site of clear antiquity; references to it can be found as early as the first settlement by the Cristarubrae (who attributed the stones to the work of giants). Even then the stones were rightly reckoned to be ancient. In the words of Implicitus, "the great circle of stones is a mystery, even to the tribesmen here, who hold them to be a sacred place."

The nine megaliths are each 10 feet high and 4 feet wide; they are irregularly shaped pillars arranged in a circle, but (unlike some similar configurations) not aligned to any discernible celestial phenomena. Although they bear no resemblance to humans (or indeed any living form), most observers agree that the stones seem to possess a palpable aura, that is to say a feeling of malign intelligence. Residents of the nearby village of Muriz (named after the stones, not the other way around) will politely dissuade any visitors of such notions, "Tha's nobbut a numpty" they'll say with a convivial laugh, displaying the Mikelmercken forthrightness, "Merry meetings."

No matter who one converses with in the village, all will provide the same greeting and farewell - "Merry meetings".

This is not a normal thing to say.

For your D&D (and similar) game

In game terms, the entire megalith site will radiate as "evil" with Detect Evil, but the villagers themselves will not. The megalith site is also highly magical, being of great intensity; any caster using Detect Magic on the site will be dazzled by the brightness of the stones and the area encompassed by the circle, as well as being subject to a random insanity (although if you want to be less gonzo and more moody, inform the player that their ultimate loyalty is now to the stones and the village).

The stones are a focal point for the power of the earth, and allow the "grand receptor", the leader of the community's devotion to the stone circle, (currently a 6' 4" man of middle years and a gravelly voice called Yan Cooshbothsen [Cleric 10], who can cast Stone Tell at will) to use the following powers within the circle: Earthquake (1/day - the next day no damage will have been caused to the area and all is as if the spell had never been cast), Mass Charm (2/day), Conjure Earth Elemental (1/month)

The arrival of a group of strangers (like your PCs) will prompt the village to adopt a visage of utter normality, despite the fact that over time a few of them (5% chance) have been transformed into a stony form that radiates the same unease as the Nine Men themselves (treat as Stone Golems). Their guise of normality can be adopted or discarded at will, but at times of stress the facade may drop. Over the next few days, Yan will invite them to dine at his grand home, which offers hints as to the antiquity of the community's worship of the megaliths via tapestries, paintings and journal entries. Most of these clues will be hidden in some way in the form of symbolism in the work (spiral designs, images of robed figures processing etc). The Nine Men will begin to figure in the dreams of the PCs, silent and ominous. If the PCs do nothing over the course of this, they will eventually begin to feel drawn to the circle, where the village are gathered. Yan will greet them, welcoming them to their new family: 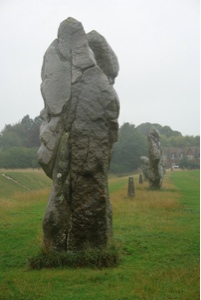