(The following is a conversion of the wu jen from Dragon #229 originally for 2E, and the original wu jen from 1E Oriental Adventures, both by the fantastic David "Zeb" Cook) 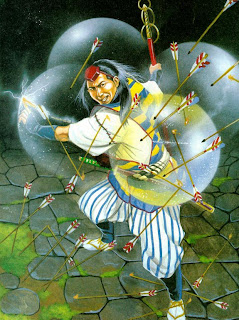 Wu Jen are spellcasters from a very different tradition to the standard magic-user. Each studies a particular school of elemental spells under a lone master, often in a remote location. Wu Jen train their bodies and minds to be as one. They are able to meditate, 1 hour of which is as restful as 2 hours of sleep. They remain aware of their surroundings and take no surprise penalty for being asleep. They can react as if awake to any threats. Wu Jen have frequent dealings with spirit creatures, and can speak the languages of oni and tengu.

Wu Jen are unable to use shields or wear any kind of armor. They are able to use any weapon. They are people who study the changing forces of nature, and cannot be of Lawful alignment

Wu Jen use the Magic-User experience table. They use the combat progression, and saving throws of magic-users. Each Wu Jen must choose a school of spells; once chosen, it cannot be changed, and no spells can be chosen from other schools. Each time a wu jen gains a new experience level he can only learn 1 new spell (of any level he can cast), but they have no need to memorise their spells, nor do they use spellbooks.


In order to cast a spell, the Wu Jen spends triple the spell's level in HP; thus, casting a magic missile costs 3 HP. A Wu Jen can never cast a spell requiring more HP than he currently has. Because of their reliance on their body's own power, wu jen only receive half the benefit (rounded up) of healing spells; e.g. if a cure light wounds spell would normally heal 4 HP, the wu jen is only healed for 2 HP).

Certain taboos must be abided by in order for the Wu Jen to sustain his magic. Examples include:

The DM and player should feel free to create their own taboos, as long as they are as restrictive as the examples above. Taboos should relate to purity or cleansing of the body. At 1st Level, the Wu Jen must choose 1 taboo, and then another at every fifth level. Failure to abide by taboos results in the loss of spell-casting ability for 2d4 days.

Reaching 6th Level: Wu Jen gain the ability to enhance any one of Strength, Dexterity or Constitution by 1d4 points for 2d4 rounds. The effort required costs the wu jen 1d6+2 hitpoints. Ability scores cannot be increased beyond racial maximums, and any adjustments are applied immediately. They are not retroactive (e.g. increasing Constitution does not increase hitpoints). This ability can be used multiple times, but only once per round.

Reaching 10h Level: The Wu Jen gains 1d4 pupils, all 1st Level Wu Jen. When each pupil gains a level, there is a cumulative 5% chance that he or she will leave to pursue their own study. Each that leaves is replaced by a new 1st Level pupil (unless the pupil leaving was mistreated).

Reaching 12th Level: By spending 1 HP, the Wu Jen can leap up to 30' in any direction. The Wu Jen can perform a series of leaps in a round, up to his normal movement rate.
Posted by Unknown at 23:07