D is for Dark Eldar

Although I've been interested in the WH40K universe for the last 20 years or so, I've never collected an army for the game before (I collected a couple of gangs for the spin-off game Necromunda. Ah-ha, a post for N!). So, upon my rejoining the 40K fold, I had to decide on an army to collect. Now, if I was sensible, I would have chosen either Chaos Space Marines or Dark Angels Marines (the two armies that come in the game's boxed set). That way, I'd be able to stick to one force, with one book (each army has an associated book with rules and background, honestly, this game is like a drug habit).

But no, I was seduced by the Dark Eldar. Here's why: 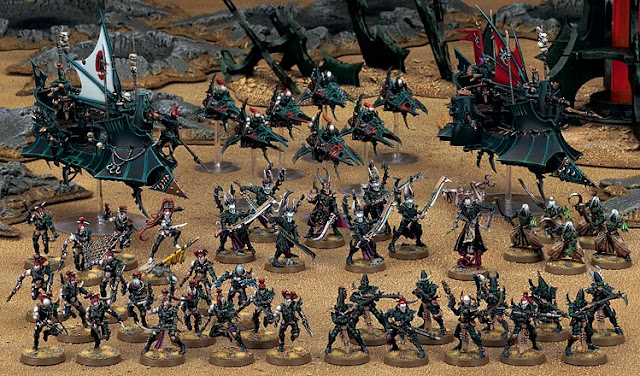 Lean, predatory, elfy, it's all good. The models are ah-bloody-mazing. Currently I have this set-up (I know it won't make much sense if you don't know the game):


Basically, I have a general (the Archon) with 3 hired bodyguards armed with two-handed swords (Incubi) riding around in a flying chariot (Venom). On foot, I have 10 ranged warriors (Kabalites) mostly armed with rifles but with a couple of special weapons. The Wyches are gladiator-types armed with special grenades to use against vehicles.