C is for Chaos

Get back to work, citizen, before I have to exterminate you. 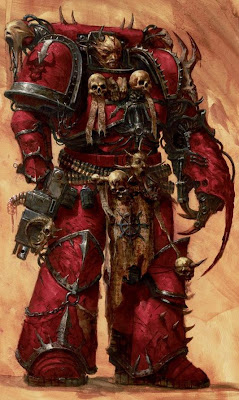 Chaos is the human psyche given horrid, un-natural life and free reign within the alternate reality known as the Warp. In the universe of Warhammer 40K, it is the ultimate enemy of humankind (along with all the other ultimate enemies...). 10,000 years ago (i.e. in the 31st millenium) the very defenders of mankind, the Space Marine Legions were corrupted by the blandishments of the Chaos Gods and turned traitor. They were defeated by the loyal Legions, and promptly escaped to the warpspace bleed known as the Eye of Terror. Today they survive as soldiers of fortune, still wanted by the Imperium. If you're desperate, and if you can find them, maybe you can hire... the A-Team Chaos Space Marines!