If you've found your way here for the first time, then welcome! This is a blog containing a few thoughts on house rules for Dungeons and Dragons (in its various forms), some stuff about miniature painting and wargames nostalgia.

I took part in the Challenge a few years ago, and thought I should try to get back into the discipline of writing again, given that I already write assignments for my university course, and that I'm trying to write a play script at the moment.

The theme I'm going to be loosely following is Warhammer 40,000. If you don't know what that is, then allow me to enlighten you over the next few days. Briefly, WH40K (as it's sometimes known) is a wargame played with miniature figures, set in the 41st millennium, a nightmarish future galaxy dominated by the Imperium of Mankind. This dystopian empire is beset by alien forces and supernatural powers beyond sanity. It's honestly fun. 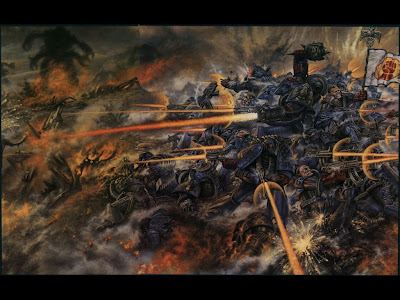