Creating a new world of odd

I posted on G+ recently about being in a world-building funk. I was casting around for a rules-set that would inspire me, and I found it in Into the Odd (from the blog http://soogagames.blogspot.com/). It's based on OD&D but is thematically and mechanically streamlined. There are no spellcasters; all magic that PCs can use comes from Arcana (mysterious items left by the equally mysterious Astrals).

I've also been playing a couple of video games from 2 well known series recently and they were added to the stew of elements I'd want in a game I ran or world I made.

Two possible ideas came to mind strongly: the Young Kingdoms of Moorcock's Elric stories, or a city-state modelled after those of Renaissance Italy. For the truly unique experience I decided to go with the latter, firstly because it means actually creating something, and secondly FLAILSNAILS, man. 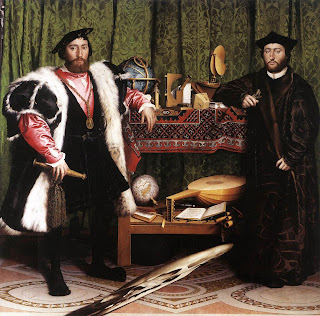 Now, it's not going to be historically accurate or a love-letter to the Medicis. It's probably going to be as historically precise and as serious as Warhammer FRP 1E's version of Europe. So, now to create our city-state: I want something that combines the artistic culture of Florence (Firenze) with the ruins of Rome. (Yes I've been playing Assassin's Creed: Brotherhood, can you tell?)

Email ThisBlogThis!Share to TwitterShare to FacebookShare to Pinterest
Labels: FLAILSNAILS, Into the Odd, Renaissance