The barbarian has always been such a weirdo. Unearthed Arcana was his debut, followed by a reinterpretation in OA. 3rd Ed gave him the power to freak out and rage. 4E has him as berserker who channels primal spirits. All very cool, but I wanted to tone the OA barbarian down a bit, hence he loses his "I can smell magic and illusions" powers. 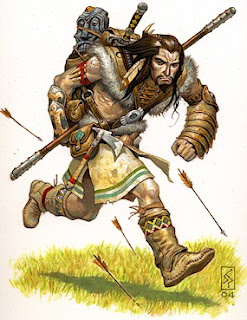 Barbarians are warriors from outside what is generally regarded as “civilisation”, living in environments others consider inhospitable. The barbarian is hardened by his life in the wilds, and has the instincts of a predator. Each is a dangerous combatant, especially so in his native terrain.

Each barbarian must choose a terrain, from which he (and his clan) originate:


Barbarians are able to track creatures in wilderness and underground environments. The base chance is 90% when in the wilderness, with +2% for every creature more than one in a party to be tracked. There is a cumulative penalty of -25% for every hour of rain, or -10% for every day that has passed since tracks were made. In underground environments, barbarians must watch a creature to be tracked for 3 turns prior to tracking it, to observe its manner. The base chance in this case is 65% when underground, modified in the following manner:
Climb in Natural surroundings – chance reduced outside native terrain


Hear Noise: Barbarians can attempt to listen for noises, in a cave or hallway, and at a door or other locations but the barbarian must be quiet and in a quiet environment. Unlike the other thief abilities, this ability is rolled using 1d6.

Back Protection - detect attacks from behind

Leadership - improved Charisma with his own people

Call Horde - Get all Genghis Khan on yo' ass

Email ThisBlogThis!Share to TwitterShare to FacebookShare to Pinterest
Labels: Barbarian, Kitsune and Kensei