Towards an OA Retro-clone

The stars are right... all the omens are propitious... 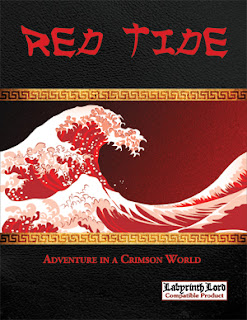 Jagatai at Ramblings of a Great Khan is proposing an OA retro-clone for OSRIC, and Lord Gwydion  at What a Horrible Night to Have a Curse is putting the final touches on a clone of Chris Pramas' 2E-inspired game Dragon Fist. I've started doing ports of the OA classes and races to Labyrinth Lord. As can be seen the swell of Asian fantasy is building both in OSR and 'new-school' circles. To break it down with the current products and their parent games:

Ruins & Ronin (Swords and Wizardry) - Mike D (Sword +1) created the high-water mark of recent D&D oriental shenanigans with this excellent work. If you can't tell, I love this book. The inexhaustible imagination of Matt at THE LAND OF NOD has created Mu-Pan, a sandbox setting encompassing folklore, myth, pop fiction and game lore for Ruins & Ronin. Both have produced amazing, inspiring work.

Red Tide (Labyrinth Lord) - Another Asian sandbox with elements of horror and culture clash built in. I don't have this book, but everything I hear about it screams "buy me!" and its by Kevin Crawford, author of Stars Without Number. Nuff said. It introduces new races and classes

Jade Regent Adventure Path (Pathfinder) -  I have mixed feelings about Paizo as a company and of their products, but I applaud their re-introduction of Asian tropes into 3.x gaming. Wayne Reynolds art - another thumbs up.

Heroes of the Jade Oath (Arcana Evolved) - This has been in development for several years, and I don't know much about how transferable its ideas are, but there are free previews of it to download at RPGNow, and DriveThruRPG.

So, there's lots out there right now that caters to the desire to break out of Western Europe and get down with the samurai and the wu jen (these are all quite Chinese and Japanese inspired, but I pass no judgement on that).

Regarding what there is for OSRIC, a key work if someone were to embark on OA for OSRIC would be this OSRIC Unearthed. It has conversions for martial arts, the ninja, the yamabushi (new take on the monk), and the barbarian. I think that it should be the first port of call for someone looking to write/play/run OSRIC OA.

What would I want in an OA retro-clone? That's for another post!