Playtest - By This Axe I Rule

Table set-up: 3ft by 3ft table. Chris placed the terrain, and Jonathan chose which table edge to set-up on. Chris set-up on opposite side. Decided that forces could set up in an area 6” from each table edge on their side. Rolled dice to see who would set up first, and then alternated placing units. If a character was separate to a unit, they counted as a unit for placement.

Time of day: As the dark elves had the darkvision quality, we used a day/night determination method from the game Fantasy Warriors. This came up with the first segment of daytime, so no night-fighting advantage for the drow.

Backstory: In an alternate future of our D&D campaign, only one member of the Heroes of Winterhaven survives, Donaar K’baab, dragonborn paladin of Bahamut. His companions have fallen or in the case of Karolina the bard, been subverted to the cause of the Heroes’ enemy, Orcus, Demon Lord of Undeath. With a ragtag band of followers, and some cross-planar aid from some halflings armed with curious flame rods, Donaar goes to battle Karolina and her warband. 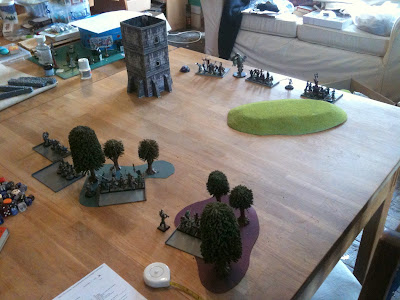 Turn 1
No missile fire (out of range). Moving forward in most cases. Wood Elves stayed in woods but changed facing. Turn phases were met with approval, especially the simultaneous nature of missile fire.

Turn 2
Dark Elves and Wood Elves fire upon one another. Dark Elves eliminate the Dwarves, but Donaar is unscathed (too bad I only had 3 dwarf minis...). Ghouls take casualties. to missile fire. Hobbits move to cut off the Toad and Troll, who are hidden behind the tower. Friar Duquesne hangs at the back, forgetting to use his save power. (Doh) 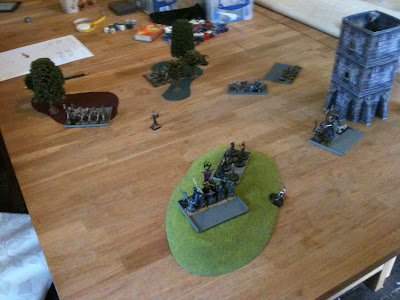 Turn 3
Hobbits gun down Madskylz, as he emerges from behind the ruined tower. Ho-pe-teh also emerges. Wood Elf Unit 1 loses 3 members and their morale holds. Wood Elf Unit 2 loses 3 members, and fails morale test. Starts to flee. Elrose engages the ghoul unit and destroys them with his mighty axe, before he too is killed. 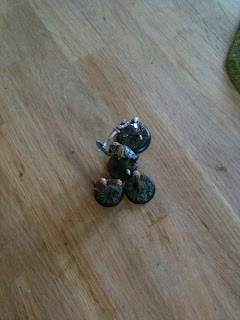 Turn 4
The hobbits shoot at Ho-pe-teh, but the toad survives, slowly plodding towards the small riflemen. Donaar K’baab, Daphid Powy, Karolina, and Friar Duquesne enter into melee. Daphid and Donaar trade blow for blow (we both kept guessing one another’s moves very accurately), but finally Donaar is felled. Friar Duquesne smashes Karolina round the head and she too is slain. The fleeing Wood Elves are unable to be rallied, as Friar Duquesne is too far away, and thus flee off the table. A victory for the forces of Orcus.
Posted by Unknown at 22:30 No comments:

Email ThisBlogThis!Share to TwitterShare to FacebookShare to Pinterest
Labels: By This Axe I Rule, Miniatures, playtest

1. If you had to pick a single invention in a game you were most proud of what would it be?

Turning Keep on the Shadowfell into a generational soap opera

2. When was the last time you GMed?

3. When was the last time you played?

4. Give us a one-sentence pitch for an adventure you haven't run but would like to.

The adventurers engage in an ornithopter battle as Atlantis crumbles

5. What do you do while you wait for players to do things?

Look stony faced, or hum merrily in an innocent fashion

6. What, if anything, do you eat while you play?

7. Do you find GMing physically exhausting?

8. What was the last interesting (to you, anyway) thing you remember a PC you were running doing?

Romancin' the Queen of the Shadow Fey

9. Do your players take your serious setting and make it unserious? Vice versa? Neither?

11. What was the last non-RPG thing you saw that you converted into game material (background, setting, trap, etc.)?

The most common thing is people's voices for NPCs

12. What's the funniest table moment you can remember right now?

The intrepid macho adventurers charging into a broom-cupboard

13. What was the last game book you looked at--aside from things you referenced in a game--why were you looking at it?

d20 Fading Suns. It's great setting and I might try it in True20

14. Who's your idea of the perfect RPG illustrator?

15. Does your game ever make your players genuinely afraid?

Not scared, but concerned for their characters - all the time.

16. What was the best time you ever had running an adventure you didn't write? (If ever)

17. What would be the ideal physical set up to run a game in?

18. If you had to think of the two most disparate games or game products that you like what would they be?

Elric! and Dogs in the Vineyard (sorry Zak)

19. If you had to think of the most disparate influences overall on your game, what would they be?

Final Fantasy VII and the Carry On films

22. Is there an RPG product that you wish existed but doesn't?

A Legend/MRQ2/RQ6 version of Griffin Mountain

23. Is there anyone you know who you talk about RPGs with who doesn't play? How do those conversations go?

My wife - she hasn't played for a while. My brother - the same. They're still interested though.

Email ThisBlogThis!Share to TwitterShare to FacebookShare to Pinterest
Labels: RPG

It is a truth universally acknowledged that Labyrinth Lord rocks. You know the procedure: 3d6 in order (although I hadn't noticed that both LL and AEC say that the GM can ask you to roll the scores in any order you like). So, going to Invisible Castle yielded a series of 8s and 9s - that's not very interesting for the purposes of this, so I rolled again and got a much more characterful set of stats. Low Wisdom (again) - are the dice lords telling me something? Highest score Charisma? Oo, let's make him a real sleazebag, but upper crust with it... Not bad Int - let's go Magic-User!

Spells? Again, I hadn't seen before that in LL, M-Us choose 2 1st Level spells, and 1 2nd Level spell for their books. It's always weird to find little snippets like these. Allure is right up this cat's alley - an additional 2d4 Charisma? Whizzo! Sleep - it has to be. Invisibility - er, cos, really. 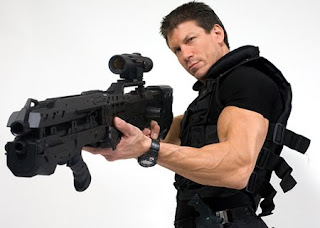 Coincidentally, after posting that I would be trying to create a PC/NPC for every game system I own, Matt of LAND OF NOD (one of the most inspirational gaming resources I've ever read) is playtesting a new system (based on the SRD).

Blood and Treasure combine elements of the 3.5 SRD with old school sensibilities and Matt's previous work Pars Fortuna (breathtaking imagination at work in that game), and I'm lucky enough to be in the player group on G+.

The Duelist sounded like a fun class, and it would be interesting to see if it could hold its own against the other 'warrior' classes. Matt sent us out randomly generated stats that we could assign as we wished. I chose Elf to get a stat boost to Dex, and just because no-one else seemed to be going for that race. All my swashbuckling characters tend to have low Wisdom (or the equivalent stat) so it seems only right that she does as well. I've gone for the standard elfy pick of longsword, but when I saw that pistols and shot were available to purchase, I knew Astra had to have one.

Elves: +1 to starting Dex, -1 to starting Con (max 18, min 3),
base speed 30 ft., see twice as far as human in low light
conditions, knack for finding secret doors, immune to magic
sleep, +2 save vs. charms and compulsions. Speak elven, might
also learn common, gnoll, gnome, goblin, orc, the language of
fey creatures such as nymphs, pixies or satyrs and the language
of dragons. Elves can multi-class as fighter/magic-user,
cleric/magic-user and magic-user/thief.

Special: Specialized weapon (double damage, must be a sword
or monk weapon), add Int bonus to AC, +4 bonus to AC when
fights defensively, +2 initiative, riposte (6th; after missed in
combat, triple damage with specialized weapon, double with
others), establish stronghold or school (9th), save to avoid
lethal blows (12th).

Email ThisBlogThis!Share to TwitterShare to FacebookShare to Pinterest
Labels: Blood and Treasure, Character for every game, elf, swashbuckler

A Character for Every Game

Inspired by the prolific gaming god that is Dyson Logos, I'm going to have a go at creating a character for every game I own. It's one way to get some use out of them... 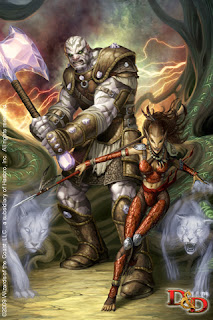