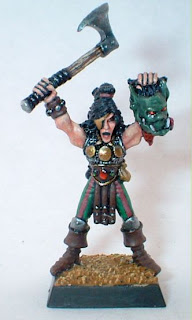 Rosey (of Drama, Dice and Damsons) and I are in discussion about play-testing ChrisK (Hill Cantons) wargames rules By This Axe I Rule. And what better way to playtest it than with an elf wielding an axe and a severed orc head?

The last time this chap and his posse of archers saw battle was at Salute '07 in London in a game of Fantasy Warriors. They were slaughtered by barbarians in a corner of the battlefield and saw very little action. It was, however tremendous fun. Winning didn't matter (I was on the 'goodies' team), and the unfolding story was heroic and hilarious.